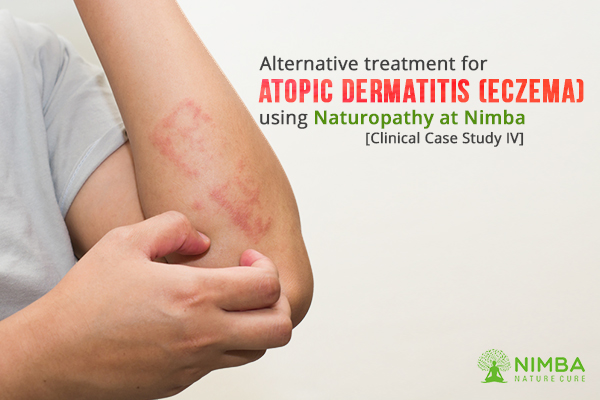 What is Eczema (Atopic Dermatitis)?

Eczema (a.k.a. Dermatitis) is one of the most common skin diseases in the world with 10 to 20 percent population suffering from it. Still, there is very less awareness about it amongst the people.

Actually, Atopic Dermatitis is a sub-type of Eczema. It is a condition where the skin develops rough and dry lesions which are itchy and red. The exact cause for the disease condition is not known yet but genetic factors and allergies are the most common reasons behind this condition. Atopic Dermatitis is considered to be a chronic condition and it has very limited treatment options.

The exact cause of Atopic Dermatitis is still unknown, however, Atopic Dermatitis is usually associated with the genetic variation which reduces the skin’s natural ability to protect itself from infections and irritants. Some other factors are also found to be aggravating the conditions such as contact allergies, digestive problems, nutritional deficiency, stress, food intolerance, and immune system problems.

The symptoms of Atopic Dermatitis are…

• The most common complication is Asthma and Hay Fever
• Due to scratching and rubbing the skin is scarred
• Open wounds and cracks in the skin may lead to infections such as herpes simplex
• Constant itching sensation results in the fragile sleeping pattern
• Increased anxiety and depression may lead to psychological problems
• According to a study, it may increase the risk of stroke and heart diseases
• It may aggravate, resulting in Neuro Dermatitis, Irritant-hand Dermatitis, and Allergic Contact Dermatitis

The guest had been experiencing the problem since childhood with thickened, cracked, scaly skin on neck & upper back; lower back; and on legs below knee joints.

Also, the guest had hypersensitivity reactions to allergens such as dairy products, processed foods, and dust.

He was wondering how to get rid of eczema naturally?

Upon examination of skin, experts observed dry and reddish skin on the neck, upper back & chest, lower back & flanks; and redness on face, forehead & around the eyes.

Usually, Atopic Dermatitis is seen first in very young children up to the age of five, and it may fade away as the child matures. But in our present case, the guest is still suffering from the irritating rashes and itchy skin. So, identifying triggers which cause the skin problems and addressing them can be the best treatment.

As the guest has the history of allergic reaction to certain food items, following correct diet and lifestyle is most important. Also, reducing the itching sensation and red patches by the way of herbal remedies and detoxification is recommended to the guest along with Naturopathy.

The Naturopathic approach to Eczema treatment:

Yoga and Meditation was also advised to the guest, to reduce the stress and anxiety. It helps a lot in reducing the urge to scratch skin and improves confidence.

Within two weeks of the Naturopathy treatment for Eczema, the redness and itchy skin on forehead, around eyes, face, Neck and upper chest areas got healed.

Also, the thickened and scaly skin slowly become normal during the course of treatment.
Within 20 days of treatment, there was significant reduction in all the clinical issues of guest at Nimba Nature Cure Village.

Atopic Dermatitis (Eczema) has been growing at an alarming pace across the world. It affects the young children more but its onset can be easily seen in the adults too. And with lack of clarity on the actual cause and apt treatment, preventing the disease onset and restricting it from aggravating further is the best way to address the problem.

Natural Eczema treatment helps a lot in controlling the disease for a long time. Also, it imbibes certain changes in lifestyle and diet to restrict the symptoms of the disease.

Alternative System therapies like Naturopathy, Ayurveda, Diet therapy, and Yoga can effectively address the root cause of Atopic Dermatitis such as immune system dysfunction. With a well-planned nutritional diet and treatment based daily regimen, a person can alleviate the disease condition and lead a healthy life.

Nimba Nature Cure Village is one of the most sought-after naturopathy and wellness retreat, known to effectively addressing serious disease condition through alternative therapies. Naturopathy doctors at Nimba are experts in treating the cause of the Atopic dermatitis (Eczema) through natural remedies for eczema.

Find out which naturopathy treatments are appropriate for you with Nimba.